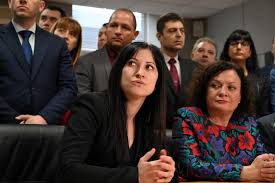 According to an order by Prime Minister Boyko Borissov, Slaveya Stoyanova has been appointed Deputy Minister of Environment and Water. She has taken the position of Krassimir Zhivkov, who was released due to the affair with the imported waste from Italy.

Slaveya Stoyanova has a master’s degree in biological sciences and since 2015 has held the position of Director of Waste Management and Soil Protection at the Ministry of Environment and Water. Prior to that, she was a chief expert in the same directorate.