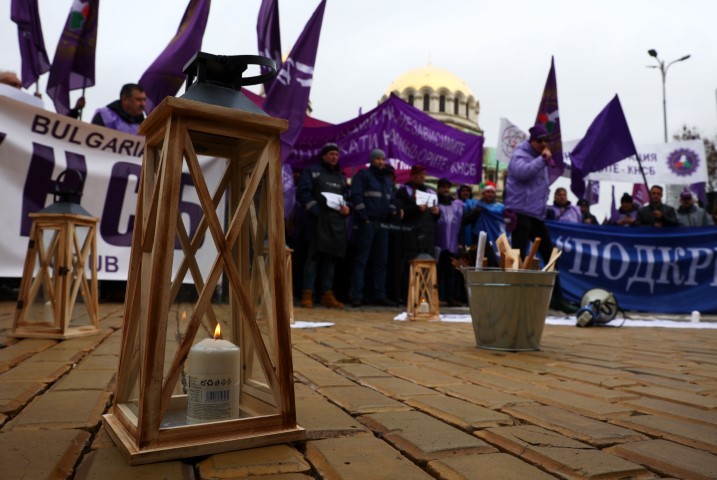 The trade union demonstration under the slogan “To protect the country’s energy security” is taking place in front of the parliament building.

The action is due to the commitment made in the National Plan for Recovery and Sustainability to reduce carbon emissions from energy by 40% by the end of 2025 compared to their levels in 2019. Unionists are demanding that parliament oblige the government to start negotiations with the European Commission to renegotiate the plan.

Workers from coal mining companies and thermal power plants from all over the country participate in the demonstration. The protest was organized by KNSB and KT Podkrepa. During a break for the deputies today, people’s representatives from different groups joined the demonstrators, who presented them with a lantern each.

The area was closed to car traffic.

The main demand of the protesters is the cancellation of the commitment to reduce carbon emissions and guarantee the operation of coal plants until 2038.

The protest takes place against the backdrop of debates in the plenary hall on the changes to the Recovery Plan.

KNSB President Plamen Dimitrov stated that the decision of the deputies is only a first step and it remains to be seen how it will be implemented.

“This is a necessary first step to mandate the Council of Ministers to negotiate with the European Commission to renegotiate the plan on various fronts and to drop the most important thing that worries us all, that notorious 40% reduction in carbon emissions.”

The participants in the action insist on alternative solutions to guarantee energy security if key energy capacities are shut down.

Here is what one of the participants in the protest told the media:

“First of all, we are here to fight for our jobs, but we are also fighting for the national security of the country, which without ‘Maritsa’, without coal power, currently cannot exist as an energy market. We want the European Commission to take into account the specifics of our country and our energy system”.