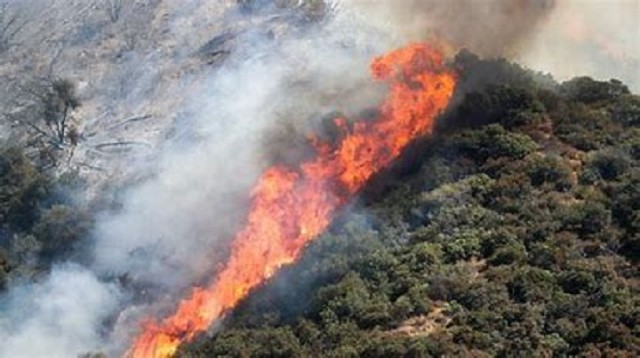 Wildfire in Bulgaria’s Rhodope mountain is growing. There is a risk that the fire may affect nearby settlements in the area of ​​Lucky municipality. Fire-fighting teams have been battling the blaze for a second day. The Cougar military helicopter has been dropping water on the outbreaks since the morning, which is extremely difficult to reach.

The situation above the village of Yugovo, Lucky municipality, where more than 100 decares of pine forest are burning, remains complicated. The flames, which were brought under control yesterday (August 12), spread into new land during the night. The terrain is difficult to access, which further complicates the work of firefighters. A second outbreak was found near the site of the fire, to which teams were also sent.

The terrain is difficult to access and remote, which necessitated the involvement of a Cougar helicopter from the Krumovo airbase. The team made several droppings of water on places where the firefighting teams could not get to.

“The terrain is very dangerous, it goes behind the rock. Have you seen a stone burning? I saw with my own eyes. And when the stone fell down on the leaves of the trees, they start burning as well,” said forestry worker Simo Hadzhiev.

Lucky residents are worried that the fire could get closer to their homes. Some plan to go to relatives and stay there until the danger passes.

“The fire is quite far up, but it is approaching,” a resident of the village said.

Due to the difficult terrain, off-road vehicles deliver water with two-tonne tanks provided by the local mining company.

“We deliver water, it is difficult to access, there is no water there. On a 10 km of dirt road and to Yugovo we have another 11 km of asphalt road, the helicopter has poured three times so far, quite difficult and very smoky. The smoke is next to the houses, ” said volunteer Emil Manolov.

6 fire engines and 14 firefighters from several fire fighting departments in Southern Bulgaria have been battling the fire for a second day.

“My colleague and I are coming to replace the colleagues who have been fighting the fire since last night. We love the forest, we will do everything possible to contain the fire,” said Lyuben Mishev, a senior forestry official at the Trakia hunting farm.

According to local people, a possible cause of the fire was a thunderstorm in the area two days ago.