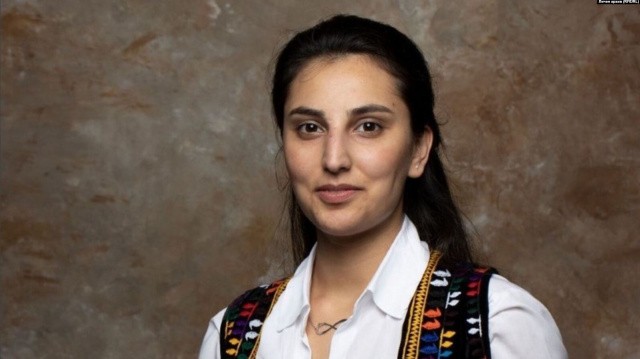 This is one of her earliest memories. She is in Kabul, visiting her uncle’s house with her mother, father and sister. At one point shots are heard outside. Everyone is hiding in the basement of the house. They spend the whole night there. When they head home the next morning, they go out into a street littered with corpses. The night before, the Taliban had passed by and shot anyone outside. Then Silsila Mahbub was 6 or 7 years old. Today the young Afghan lives in Bulgaria. She’s been seven years here. She came because she was looking for freedom, a better future and because she has relatives here. They help her come legally, with a visa. She quickly learned Bulgarian, enrolled in university, found a job. Today she has her own sewing workshop, with which she wants to give work to other refugee women. Since the Taliban offensive began a few months ago, Silsila has kept an eye on what is happening in her native Afghanistan. She says that in the recent days she has spent all her time clinging to her phone, watching the news and waiting for a call from her relatives. She also talks to other Afghans who live outside the country like her. Together they exchange news, share their fears. Sometimes, more often than not, it happens that they cry together. In her account of what she learned from her loved ones in Afghanistan, it is difficult to say which emotion prevails over others – shock, frustration, anger or pain.

“No one believed it would happen. That they would take Kabul,” Mahbub said. According to her, Afghans inside and outside the country still cannot believe that the Taliban are coming to power again, that history is repeating itself. Although the Islamist insurgents’ rapid offensive has been going on for several months, no one expected the country to fall into their hands so quickly. And most of all, no one believed that the capital, Kabul, the best-guarded and freest city in Afghanistan, could be taken. “That’s why so many people from smaller cities have fled to Kabul in recent months,” Silsila added. She says that all her relatives and acquaintances in Afghanistan are currently overwhelmed with fear. “Nobody goes out, everyone stays at home, hides. Only men go out.” Mahbub has not been in contact with one of her uncles in Kabul for three days. He is in the military – while they were still in contact, he was particularly worried because the Taliban knew he had served in the government army. A few days ago, he told other relatives not to call him anymore because he feared that the Taliban had access to mobile networks in the country and could reveal his location. “He only called my aunt and told her – I’m fine, but tell the others not to call me. I’m hiding somewhere where they won’t find me.” Silsila says people are worried and that the Taliban will soon ban the use of social media such as Facebook and Twitter and even completely block Internet access. In the past, the Taliban in various provinces imposed restrictions on the use of the Internet and mobile phones. According to her, however, the most horrifying thing is the change in women’s lives. “They no longer dare to go out unaccompanied. They have started wearing burqas – some out of fear, others because they have heard that the Taliban punish those without a burqa. “Girls can only study until they’re 13. Then they have to get married,” Silsila said, adding, “Just like before.”

“A dream I’m still waiting to wake up from”

Despite repeated assurances from the insurgents that women’s rights – such as ones included in Islamic law – will be protected, the young Afghan woman is skeptical. On Monday, the Taliban even said women would be included in the country’s government. Silsila, however, reacted with scorn. “It’s funny. And it certainly won’t happen. Not just me – no one believes it will be any different. They only say all this until things calm down. It’s a mask. But in a few days the mask will fall off.” The sentiment among activists fighting for women’s rights in Afghanistan, with whom Mahbub has spoken in recent days, is indicative. She has been writing a book about their work for several months. When she conducted interviews with them at the beginning of the year, they said they are strong, they will fight to the end, they are full of courage. “But now these women are in shock. They can’t believe what’s happening. They tell me it’s like a dream I’m still waiting to wake up from.” One of the most shocking things her relatives in Afghanistan say is the return of the same brutal punishments as in the “dark times” of the 1990s, when the Taliban were in power. There is talk of isolated cases in which women were whipped on the street because they did not cover their face or hair in a certain way. The administration of justice, the decision on punishment, takes place on the streets, according to the final interpretation of Islamic law applied by the Taliban. “They think that the Qur’an says to beat women, that women have no rights. But if you read the Qur’an – there is nothing like that, there are human rights, no matter if you are a man or a woman,” Silsila said. “This is not the Islam we believe in. If this is Islam, I renounce it.”

The feeling of being abandoned by the world

Some of the footage from the last few days that has left the deepest imprint on her is the captured seconds in which several Afghans, clinging to the closed doors of an American plane, refuse to jump from it even when it detaches its landing gear from the runway. “This plane with people outside – it’s not human! Why doesn’t anyone say anything? It’s not fair. People need to understand that we just want to live a normal life. We want freedom like everyone else. We want to be able to learn, to work, to sing. Not to be like before, “says Silsila. She is angry with both the United States and the Afghan government. “They lit a fire, left the Afghans in the middle of it and left. And they said – we didn’t do it.” “I want an answer to why this is happening? And not just me – we all want an answer. It is clear that they planned this 2 years ago. America is just playing, and Afghanistan will continue to be under their control,” Silsila said. . What follows after shock, anger, and pain is actually the feeling of abandonment. The feeling that the Afghan people were left alone and the world was silent turned its gaze to the other side. “It can’t go on like this yet. I don’t know how, but it has to stop. So many years of losing, losing, losing… How much more pain can you accept? How many times do our fathers and mothers see their children die?”

A look towards Kabul

Silsila Mahbub was once an optimist. Today, only a tiny amount of hope remains. She has this hope for European countries. She says she expects them to support Afghanistan, to “put in any other government but the Taliban.” The other speck of hope is in Panjshir, the last region in Afghanistan not controlled by the Islamist group. “They want to make an army against the Taliban. But they also need support – maybe from European countries. We only look at them.” When she left for Bulgaria 7 years ago, Silsila boarded the plane, believing that she would fly to work, gain experience abroad and then return to Afghanistan. Until months ago, literally days ago, she continued to believe the same. Today, she no longer knows if her flight back to Kabul will ever happen.