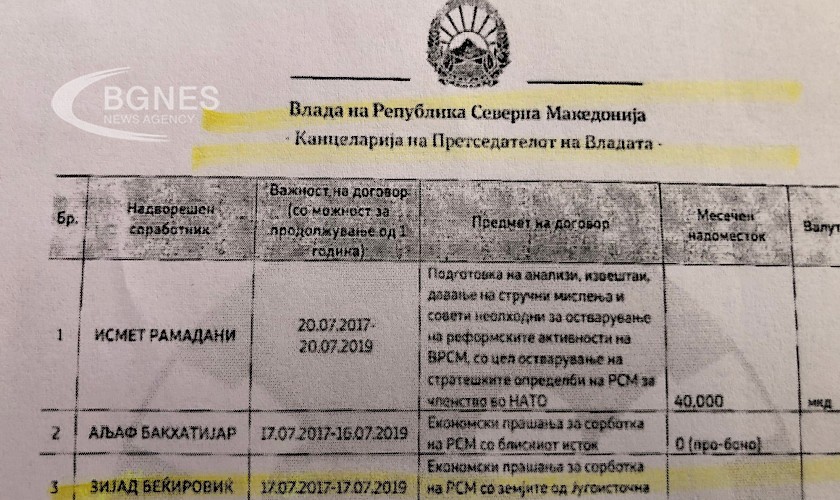 Three advisers to Macedonian Prime Minister Zoran Zaev are taking part in defaming Bulgaria in the European Union. This was revealed this morning on bTV by the owner of BGNES Agency Lyubcho Neshkov and pointed to the latest publication in their “Institute” based in Ljubljana, Slovenia, in which Bulgaria and Germany are pointed out as countries that mafiaize the EU.

The Slovenian lobbying institute, bearing the pretentious name “International Institute for Middle East and Balkan Studies” IFIMES, has been publishing for the second year in a row fierce anti-Bulgarian analyzes and reports aimed mainly at spreading in the Western press and forming a negative attitude towards Bulgaria. In its latest publication, on March 24, IFIMES called Bulgaria the “ugly face of the EU” and focused its attack on two topics – a historical essay on what Bulgaria is and an analysis of the ruling majority in Bulgaria, in particular GERB. In the typical Yugoslav style of dictator Josip Broz Tito, Bulgaria is described as a state “artificially created by a treaty between Russia and the Ottoman Empire in 1878.” Then, according to the authors, there were no Bulgarians in Bulgaria, but only “Bogomils, Macedonians and Turks”,

“Slovenian” analysts also believe that “through GERB and similar political parties, the mafia has penetrated the EU institutionally.” According to them, the German Christian Democratic Union (CDU) and personally Chancellor Angela Merkel are the “bosses” behind the “crimes of Boyko Borissov”, and it is stated that representatives of the CDU are directly involved in crimes. According to the authors, in addition to sister parties (as part of the European People’s Party), GERB and HDZ are also “criminal sisters”. The reason, according to “Slovenian” experts, lies in the fact that both the HDZ and its Bavarian coalition partner, the HSS (Christian Social Union), “secretly nurture and sympathize with the defeated ideology of World War II.” In fact, for IFIMES, in addition to being criminal heads of Balkan mafia structures.

The IFIMES also in multiple publications claims that 10% of the population of Bulgaria are ethnic Macedonians despite just 1,654 out of over 7 million people in the latest 2011 census describing themselves as such. They cite a motion for a resolution on the rule of law and fundamental rights in Bulgaria from EU, however there is no information whatsoever about the number of ethnic Macedonians in the cited resolution. Therefore this figure essentially made up by this so-called institute.

Due to the scandalous publications, two of the institute’s honorary presidents, former Croatian President Stipe Mesic and last Yugoslav Foreign Minister Budimir Loncar, publicly distanced themselves from the “investigations” and stressed that they were UDBA-style publications, the ominous state security of dictator Tito.

According to their official website, IFIMES is based in Ljubljana and ever since 2018 has a special consultative status with the UN Economic and Social Council. The institute’s main goal is to “promote reconciliation, preventive diplomacy, disarmament, and confidence-building policies in regional and global conflicts.”

The executive directors of the Institute are Ziyad Bechirovich and Bakhtiyar Aliaf – both advisors to Zoran Zaev, as well as Vlado Dimovski, a professor of economics, also an adviser to Zaev.

Ziad Becirovic is a Bosnian man, according to many media reports, racketeering, blackmailing politicians in Montenegro, and also links to radical Islam. Bakhtiyar Aliaf is an Iraqi who graduated from the Yugoslav Communist Party. Ziyad Bechirovich, Bakhtiyar Alyaf, and Vlado Dimovski have been advisers since 2017 in the office of Zoran Zaev

According to Neshkov, the authorities in Skopje should give an answer for the actions of the advisers of the Prime Minister Zoran Zaev after yesterday the Deputy Prime Minister Nikola Dimitrov publicly admitted that he “regrets that the amendments by MEP Tanya Fayon, who was awarded by IFIMES, were not approved by the European Parliament “